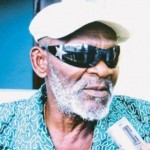 Confirming the death news to media people when contacted on phone, Pa Fatai Rolling Dollar told us that his first wife, Olaitan Olagunju, died after some months in the hospital. Disclosing to media the cause of his late wife’s death, Pa Fatai Rolling Dollar said that in one of the Decembers, prior to Christmas celebration, a firework was thrown into his house which affected his late wife’s leg.

Several efforts to treat and heal the leg proved abortive until she died yesterday. Pa Fatai is one Nigerian music in his 80′s that is still relevant in the game. He has been featured by up and coming hip hop artistes in their songs.