If reports filtering in are anything to go buy, then dead persons still earn salaries Katsina state, northern Nigeria.
According to Leadership reports, local governments and the State Universal Basic Education Board (SUBEB) in the state still pays some dead people salaries. This much was discovered by a verification committee which confirms local government staff and primary school teachers in the state. Chairman of the committee, Usman Mamma Maska, while submitting the committee’s report, informed that some of the dead persons continued to draw salaries from the two agencies for up to two years, explaining further that the September 2015 voucher for local government staff had 25,176 staffs captured, whereas 316 failed to appear before the committee. Maska stated also that of the 26,280 teachers expected to be captured during the exercise, 280 failed to appear before the committee, a situation which has led him to recommended the removal of rural posting allowances, deployment of local government staff with teaching qualification to school and adopting two-tier payroll system. He lamented as well, that in one of the local governments, 15 revenue officers who could not generate enough money to pay the salary of one among them were working steadily.The state governor, Bello Masari, in his response, accused the elites for their role in the rot being perpetrated in the local government. He however, assured that his administration would not shy away from repositioning the system and amid his worry, added that he knows of a local government which has 50 drivers but has not even a single serviceable vehicle. 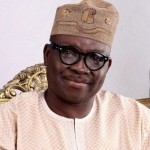