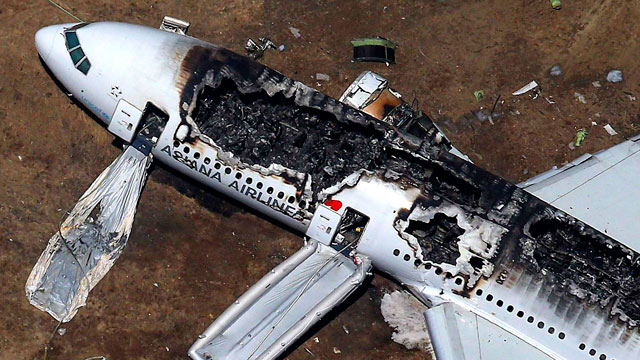 Asiana Airlines said Monday that the pilot in control of the Boeing 777 that crashed in San Francisco Saturday had little experience flying that type of plane and was landing one for the first time at that airport.
Asiana spokeswoman Lee Hyomin told the Associated Press Monday that Lee Gang-guk was trying to get used to the 777 during Saturday’s crash landing. She says the pilot had nearly 10,000 hours flying other planes, including the Boeing 747, but had only 43 hours on the 777.

Hyomin told Reuters that co-pilot Lee Jeong-min has 3,220 hours of flying experience with the Boeing 777 and a total of 12,387 hours of flying experience, and was helping his colleague with the landing.
In all, four pilots were on the plane and worked in rotating shifts during the 10-and-a-half hour flight from Seoul. The pilots were described by Asiana chief executive Yoon Young-doo Sunday as veterans, with more than 10,000 hours of flight experience. “And one pilot has 9,000, almost 10,000 hours’ experience,” he said.
On Sunday, a National Transportation Safety Board official said a preliminary review of recordings taken from the black boxes of an Asiana Boeing 777 flight that crash-landed into San Francisco International Airport Saturday showed that the plane was traveling “significantly” slower than normal on its descent before the crew called for more acceleration and another chance to land.

The crash killed two people and injured at least 182. The plane, traveling from South Korea slammed into the runway on Saturday morning, breaking off its tail and catching fire before slumping to a stop that allowed some passengers to flee down emergency slides into thick smoke and a trail of debris. Firefighters doused the flames that burned through the fuselage with foam and water, and police officers on the ground threw utility knives up to crew members so they could cut the seat belts of those who remained trapped as rescue crews removed the injured.